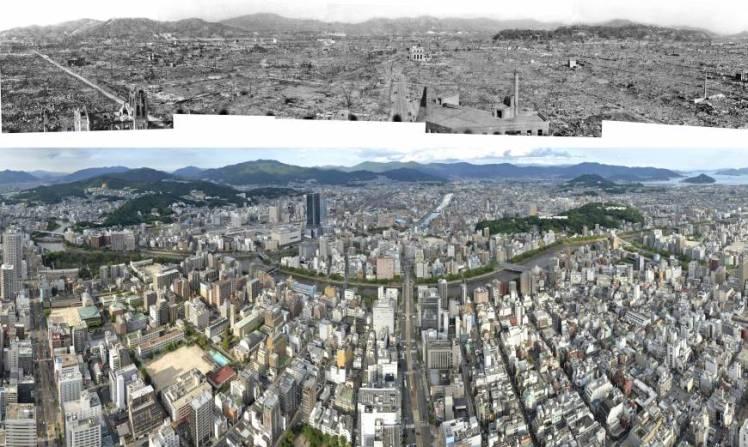 *Hiroshima – in 1945 (picture above), compared to current (pictured below)

An enormous problem exists in towns across North America that doesn’t get much airplay.  It’s not sexy and rarely captures headlines, but if you walk outside your home, you’re bound to see facets of it everywhere: I’m talking about the infrastructure deficit.

It’s almost as if society forgot these things were important; that’s how neglected the system has become.  I urge you to get acquainted with what’s going on here, as the infrastructure issue dwarfs all others when it comes to government inaction and irresponsibility over the past 50 years.

How bad is it?  Well, reports vary, and the issue itself is so large and complex that accurately estimating the problem results in a massive potential for error.  The Trump administration has recently asked congress for 1.5 trillion USD over 10 years to combat the issue.  However, the US Civil Engineers Association have pegged the shortfall as near 4.5 trillion by 2025.  In Canada the issue has been estimated by the Canadian Business Association to be around 1 trillion.  A good rule of thumb for infrastructure is 1 dollar invested = 3 dollars of GDP created, so there’s a multiplier at work here as well.

In a literal and conceptual sense, a ‘new world’ will need to be created to deal with this problem.  What is this likely to mean for our future with the onset of catastrophic climate change?

It turns out that we’ve done this many times before in history.

In June 1945 both Europe and Japan were in ruins.  The strategic bombing campaigns of WW2 had devastated all forms of civil infrastructure.  On the battlefield, the allies had realized they didn’t have a competitive advantage. In fact, they lost battle after battle.  As a result, the allies adopted a philosophy of preventing their enemies’ ‘ability to wage war’, rather than confronting their military.  This meant destroying fundamental capacities by any means necessary.

The targets were bridges, dams, electrical generating systems, industry of all types, residential neighborhoods, roads, railways, you name it.  It was death and destruction from the air and the targets were most often civilians and civil infrastructure.  This was not the heroic warfare of days gone by.

In the aftermath the entire foundation of society had to be rebuilt.  It was a unique period, as there was the ability and choice to create entirely new systems of living.  This was Joseph Schumpeter’s ‘creative destruction’ on a massive scale.

When Japan and Germany rebuilt their economies, it was with the newest and most modern of patterns of infrastructure.  When everything was wiped away, the renewal pattern was vastly more impactful and pronounced.

What resulted was an economic miracle in the 60’s and 70’s that saw growth rates and advancement that outstripped all competitors. Eventually leading to a situation where it looked like a complete economic and technological takeover was inevitable.  To this day Japan and Germany have civil infrastructure that is the envy of their OECD cohort and fundamentally more advanced economies because of it.

There are some interesting parallels with the situation we face today.  The latest UN reports are predicting that the destruction wrought by climate change upon infrastructure could eventually dwarf that seen in WW2.  Admittedly, the current mode of infrastructure decline is not as overt.  It presents itself as decay and neglect on an enormous scale, but not outright destruction.  Nevertheless, the conditions are being created that will require an extensive period of renewal, the likes of which has not been seen in two generations.

The task facing humanity in responding to climate change will no doubt require an infrastructure revolution.  Coastal flooding is going to impact our largest population centers.  We will need to rebuild our energy systems to become more efficient and less wasteful in terms of the production of greenhouse gases.  New modes of living will have to be created to address the multitude of problems posed by adaptation and mitigation of climate change.

In some sense it is a case of serendipity that we are on the verge of needing to replace vast components of our infrastructure at the very time when climate change requires it.  We are likely to benefit immensely from this process, both as a society and economy.  If we can understand that appropriate infrastructure development is key to the entire process of climate change adaptation, we will better understand our next steps.

In the political sphere society is going to need to come to terms with what is happening to our climate, as well as our infrastructure, and that it isn’t going to be business as usual.  Incremental budget changes and small-scale annual capital planning are going to become a thing of the past.  Populations will need to become comfortable with massive infrastructure bills in every calendar year, and likewise be prepared to support governments with the political backbone to enact such changes.  Think on the scale of double-digit percentage points of GDP per year invested solely in climate change adaptation and mitigation infrastructure.

This a monumental change to the way government operates now.  It will require structural adjustments to spending, taxation and investment on a scale that has not been performed since WW2.  Governments will need to become more goal-oriented in their design; voting populations will likewise need to understand and support these goals.  Once we begin to see characteristics of this change in our politics and government, we will already be headed in a far more positive direction.

In the end, successful adaptation to climate change may boil down to our ability to employ appropriate infrastructure re-development techniques.  In both a literal and conceptual sense, we need to create the new world.

Humanity has already proven itself to be incredibly resourceful and adaptable when required to be.  We’ve done this before, the process is simple.  We need to stay focused on our intended result, take a deep breath, take our tools out of our toolbox, and employ them with ALL of the creativity and drive we possess.

4 thoughts on “Climate Change, Infrastructure, and the Emerging World”