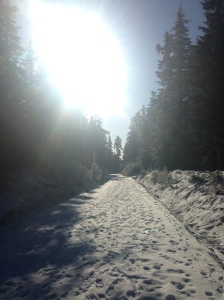 In my first two months as Councillor it feels like we have travelled great distances in a short time.

We inherited many orders of business from the previous council that we were required to become appraised of, and act upon in a timely fashion.  Mayor Milne has kept us on track as a council, and we have not let matters lapse in our transition period.

Some of you may not know that under the Community Charter, Sechelt Council is what’s known as a ‘continuing body’ that has no pause or end as a decision making organization.  This requires us to bring resolution to whatever matters were in process, some begun long before our election started many months ago.

Along with the ‘day to day’ decisions of ordinary council matters, we have had major personnel changes and a lengthy orientation.

Most importantly however, amidst all of these major changes: it’s budget time at the District of Sechelt, and that alone could keep us all busy to no end!

The efforts of the hard-working and diligent staff at our District office in these times are truly what makes all this manageable, especially for a new councillor.

Bill Beamish was appointed to oversee District operations as we undergo the search for a permanent CAO in the wake of the departure of Ron Buchhorn.  Council has set itself a 5 month target to find a permanent CAO.

Mr. Beamish has lengthy experience in the role of CAO, both in Sechelt and in Gibsons locally, as well as other similar communities across BC.  He has more than 40 years of experience working with Local Governments and received a 20 year service award for Local Government Service.

Furthermore, Mr. Beamish has an excellent reputation in the community.  His name was put forward after careful consideration by the Mayor, and council ratified this recommendation unanimously.

We’re very lucky to have been able to acquire the service of Mr. Beamish in this time of transition.

As part of our ongoing orientation package Sechelt Council recently travelled to the Local Government Leadership Academy (LGLA) hosted annually by the Union of BC Municipalities (UBCM).

The event was an intensive three day conference held at the Radisson Hotel in Richmond BC.  The format was a mixture of information sessions and seminars on the inner workings of local government.

We were treated to a broad assortment of topics, including governance, municipal finance, and media engagement.  It was an excellent overview of the broad variety of tasks entrusted to local governments.

We were joined by councils from across BC, and had a great chance to meet our cohorts.  We had an opportunity to learn, share and debate ideas, and get a handle on emerging trends in each others’ communities.

Our own mayor was featured in a mentorship panel for new councillors.  Other highlights included a memorable keynote speech by George Abbot, former BC Minister of Health, on the ‘crazy river’ of life in politics.

I personally enjoyed the opportunity to meet a burgeoning cohort of newly-elected younger councillors, similar to myself, from communities across BC.  It was great to see that there are many others treading a path of political engagement in local government, and with similar viewpoints.

It is a credit to our financial team (led by CFO Victor Mema) that we are in the finalization of our Budget and Financial Plan many months ahead of our spring deadlines.

We have now discussed this budget many times as a council, and the community has had a chance for input.  Please note: there is still time for more input from the public, please send your comments through official correspondence for our consideration (council@sechelt.ca).

My main concerns so far in the budget process have been addressed towards Sechelt’s longstanding structural deficit.  In 2009 the BC Auditor General issued a new requirement for all Municipalities to list the amortisation of capital assets on their balance sheet.  We have been in a position of structural deficit ever since.

In short: our structural deficit is the result of our current inability to fund the maintenance of our infrastructure over its lifecycle.  In the future this will result in an infrastructure shortfall.

It is my personal view that we must find a way to fund this deficit over the coming years as a council.  At current service levels an increase in taxes would be required to overcome this deficit.

Our Structural deficit is comparable to other well run Municipalities in the Province, in fact we are in a better position than many.  However, we cannot allow ourselves to become complacent: the infrastructure deficit is the single biggest long-term issue facing Municipal Governments everywhere.

Sechelt has an opportunity for leadership in addressing this challenge, and could potentially become a model for Municipalities across Canada.

2 thoughts on “New directions for Sechelt in 2015”