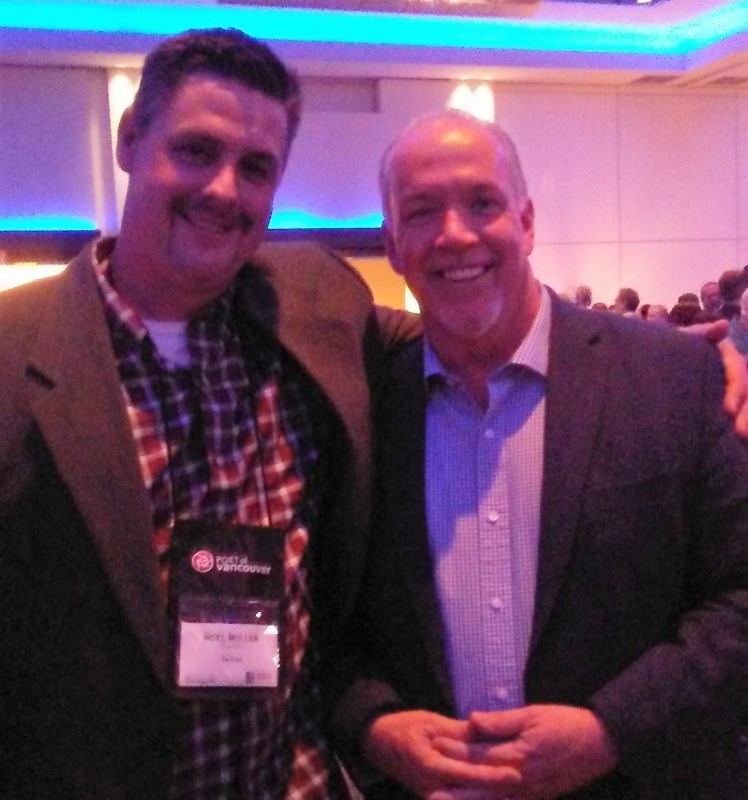 One problem I have had writing from the voice of government is how to relate something that might be  remotely interesting to read.  Much of what we do is far too boring, albeit, entirely necessary towards the smooth functioning of our society.

Rarely does a story of political action live up to anything of wider interest.  Truthfully, it takes a lot of art behind the scenes to create any ‘political moments’ at all, let alone interesting ones.

By some amazing luck, I actually have had a few moments that are worth writing about.

Here’s one that I think is…

In April of 2015 I was freshly elected, bright eyed and idealistic.  I was looking to make an impact in the political milieu after my promising electoral start in fall of 2014.

The Association of Vancouver Island and Coastal Communities (AVICC) Convention provided that first opportunity to meet my provincial counterparts and leave an impression.

The Wednesday before the conference, disaster struck English Bay in the form of the Marathassa Oil spill, capturing headlines and provoking public outrage.

The stage was set for action, and I jumped to it right away.  I researched and wrote an emergency resolution on the way over to Courtenay on the ferry and shared it with my Council via email looking for input.

We convened that evening, by then we had our CAO in support, and a workable draft.  Council enacted an emergency meeting at a local restaurant and unanimously supported including this wording as an emergency resolution for AVICC:

Whereas the oil spill event of April 8, 2015 into English Bay and the Salish Sea, demonstrated a clear lack of capacity to respond to oil spill events in British Columbia;

And, Whereas the long-term viability and economies of BC coastal communities are dependent, in part, upon the protection and preservation of the local marine environment;

Therefore, Be It Resolved that the AVICC request that the Province of British
Columbia order an independent audit of the current state of oil spill preparedness in BC.

As soon as the conference began, I hit the ground running, looking for support from potential allies.  I found them everywhere I looked.  Apparently, we had touched a nerve.

I walked outside to a protest rally being lead by City of Victoria Councillors and Elizabeth May.  Victoria Councillor Ben Isitt thrust the microphone in my hand and told me to get on stage to go promote my resolution….it all became a blur, because of course I wasn’t at all prepared to give a speech.

Only in hindsight was it clear: the moment had arrived.

The next night I attended a Young Elected Officials caucus before the traditional conference banquet.

While we waited for our rides to the banquet hall, out walked newly minted NDP leader John Horgan with his assistant.  Seeing that we were headed to the same place, he offered a ride, and I graciously accepted.

Once in the car, I jokingly broke the news to him that I was a former Provincial Council member for the chiding BC Green Party, and that it might be a tense ride.

I had lots I wanted to talk about with John, and it was my one shot to make my pitch.

I had already grown tired of the perennial partisan bludgeoning between the Green and Orange.  I thought things could be done differently, and much more effectively.

I made the case that I think we all want the same thing: a better BC government for the citizens.  A shared love for BC could unite the parties in cooperation, and ought to be the focus of both our parties’ leadership.

He took the long route, and our talk continued.

It was a very energized exchange, and we concluded feeling like something had been accomplished.  We walked into that banquet hall together as what felt like friends.  I introduced him to our Council and walked around introducing him to others.

At his delegate address, John assumed the stage to deliver his first impression as NDP leader to the AVICC membership.  Already in campaign mode, it was an election speech made by a veteran political leader.

I stood by the wall, near the stage and watched.  I was stunned when midway he pointed to me and stated: “I’m with Noel, this isn’t about flag-waving to me, this is about the people of BC and the Province we call home.”  We need to do better was his underlying message, and it clearly resonated.

He finished to thunderous applause, and I walked away feeling like we had climbed a mountain.

At UBCM 2016 I sought to further implore the leaders of the BC Green and NDP to work together in the best interests of BC.

In the context of the 2017 general election, with evident public disappointment in the BC Liberals, I felt this was too good an opportunity for BC to pass up.

I arranged a meeting with John in his office at the legislature to restate my case.

Additionally, I spoke with Andrew Weaver and his campaign chair at a BCGP function regarding this potential.

In both cases I was rejected outright.  After 2 years of difficult work in the legislature, mistrust and criticism of the other held sway.

Nevertheless, I made sure to drive home my point: cooperation was likely to lead to government.

The rest, as they say is history.

The electoral result of 2017 set the stage for cooperation like it never had before.

I wasn’t any part of the eventual agreement that got signed, but of course, I remained overjoyed at the outcome.

In 2017, I managed to meet John again at a UBCM banquet.  This time I waited in a long line of well wishers to see our new Premier face to face.  I was unexpectedly quite emotional.

What Weaver and Horgan did by cooperating truly satisfied me to my core.  It got me to believe in our public institutions again.  It proved that we don’t have to live in a partisan bloodbath if we don’t want to.

They can’t be congratulated enough for what they did.

We do in fact need to work together, not just in politics, but in all aspects of our lives.  Above all, we need that reflected in our political leadership.

When I approached John and shook his hand, he turned to the gathered mayors and ministers and said:

“This is Noel from Sechelt! He and I came up with the idea for a coalition government together two years ago in a car ride at AVICC!”

We chatted for about 10 minutes until he was pulled away to another function.  I couldn’t contain my enthusiasm.  I felt like hugging him, and I think I might have (see my firm grip on the Premier pictured above).

I know the part I played in all this was small, but it’s something that I’m going to cherish for the rest of my life.

My window onto the creation of a government.

5 thoughts on “My window onto the creation of a government….”